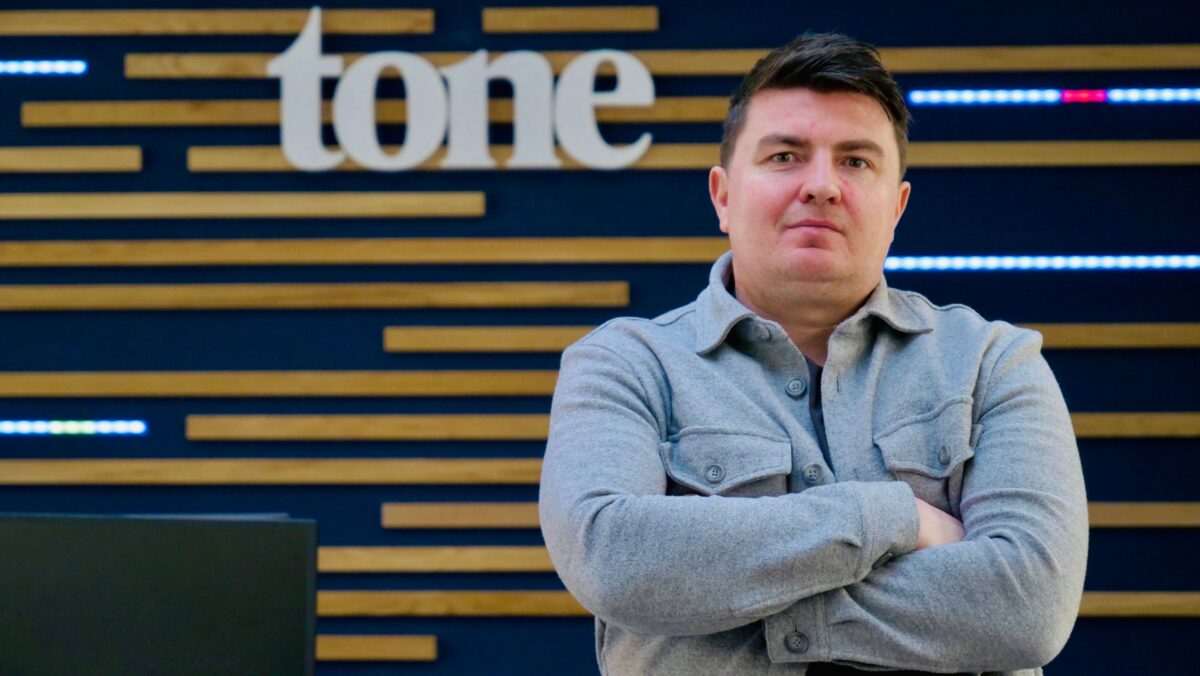 A town effort: bringing Padiham Building Society back to life

As you walk into what used to be the former Padiham Building Society, it’s hard to know where to look first. Whether it’s the striking signage of Tone, the digital content agency that has the bottom floor, it’s super-cool chill-out area or the beautiful historic features that have been thoughtfully retained, the renovation of the building is credit to Liam Veitch, who masterminded the huge project.

Liam founded and runs Tone and grew up in Padiham. After an unsuccessful three years trying to find a permanent home for his thriving agency, his attentions turned to the former building society building, which went on to become Santander.

He took Burnley.co.uk on a tour of the building and told us: “The loss of Santander was a shame for Padiham, but a sign of things to come, so at its closure in 2018 I immediately registered my interest.

“At that time we were growing at Tone Agency, and so floor space was growing at the same rate. By the end of the two-year journey to secure the property (various legal technicalities to work through), we were well over £5,000 every month in rent. Although the property was purchased and renovated with my own personal capital, a mortgage on this property would be a fraction of that.”

It was certainly an interesting journey for Liam, who admits it was the largest project he’d undertaken and the biggest team of contractors he’d ever worked with (Liam has been in property development for some time, but this project was a whole different kettle of fish).

It seemed many people were adamant the building was going to be a Wetherspoons.

“I keep to my roots and listen in on conversations happening on Padiham Community Talk. I eventually lost count of the number of times it was ‘confirmed’ it would be a Wetherspoons. I even had someone in the queue at Bertwistles tell me they ‘had it on the highest authority’ it was to be a Wetherspoons. Little did they know they were speaking to the highest authority, and that it was 100% false. I collected my tuna salad and let them continue.

“Beyond the Wetherspoons rumours, and the obvious disappointment that this was the last bank in the town to close, the support has been unanimous, particularly from local businesses who will benefit from people working here to come back into Padiham,” Liam explained.

Whether you wanted it to be a Wetherspoons or not, there’s no denying that not only is it incredible that the building has been brought back to life, but that Tone and the businesses renting the spaces upstairs are contributing to the local economy and employment.

Upstairs, Inskip Spaces is filled with incredible businesses – Gaming Publishing, Matt Brunton Design, Artclub Live, Sandra Holden Counselling Service and Emotional Awareness Recovery Services. These businesses and their clients have their own access on Inskip Street, kitchen and toilet facilities. The kitchen and toilets rival what most of us have in our homes, they are modern and meticulously designed.

Keeping to his roots

We asked Liam if, when growing up in Padiham, he could ever imagine owning the building. It must feel surreal.

“Well, I’d looked at others – namely the ‘Talk of the Town’ building, the tall ornate building on the hill opposite the old NatWest, as well as others in Burnley, so it was definitely coming. I grew up in Padiham and most of my family are still here, so it actually feels ‘as it should be’ and exciting, motivating rather than surreal for me. Though I was surprised nobody else felt it was the one-off opportunity I did,” he said.

You can’t help but be impressed with what he has done so far – looking at the before and after photos should give you some idea of the work involved. However, Liam isn’t finished just yet, including hopefully turning the former safe area downstairs into a socialising and entertainment space.

“I have further plans to enhance the frontage and make it even more of a ‘statement’ than it already is. Supplemented by the new public realm works it’ll be a real gem. It already is but it’ll be even better over the coming years.

“The building is a great example of what local people can do. I could fill ten pages with the history of this building. I know every beam, pillar and rafter. I restored the original 1950s sign ‘Padiham Building Society’, sourcing new iron lettering to bring it back to its origins; as a building owned by people who are proud of Padiham rather than a multinational corporation.”

And it certainly was a town effort. At the end of this article you will see the huge (very huge) list of local companies Liam got onboard for this project. Incredibly impressive and we love his vision and purpose.

A huge congratulations to Liam and his team and we look forward to coming back to see what he does with the rest of the space.

Glass and Stainless Ltd of Congleton

… along with all the local branches of Toolstation, Screwfix etc.